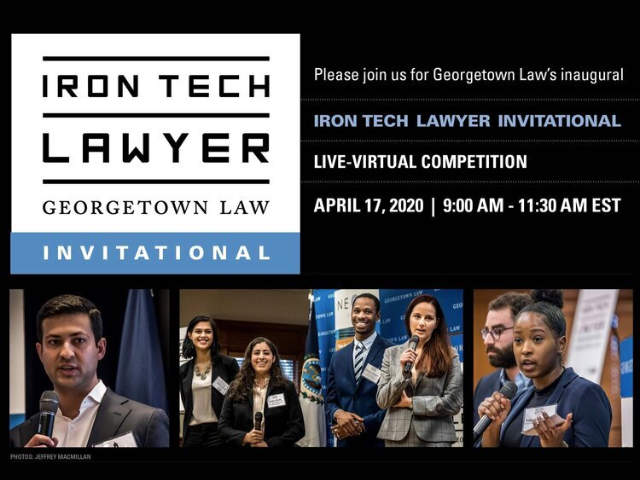 We are excited to announce that Merlin Legal Technology Advisory Board Member Brian Tang recently led a team of four students from the University of Hong Kong to win the inaugural Iron Tech Lawyer Invitational organised by Georgetown Law with an AI-powered casebank to assist injured workers to get the compensation they deserve.

The Iron Tech Lawyer Competition has been held for Georgetown Law students for 10 semesters by Georgetown Law Institute for Technology Law and Policy. In 2020, for the first time, Georgetown Law created an Invitational for students from other law schools around the world who participated in academic courses or supervised independent study to incorporate technology for access to justice (A2J) projects with non-governmental organisations (NGOs).

Originally, the student teams from around the world were scheduled to attend the finals in Washington DC. With the COVID-19 pandemic and suspension of travel and universities, the initial preliminary round, finals, and subsequent faculty workshop on teaching A2J technology, were held virtually across 5 time zones via Zoom.

The HKU team won first prize on April 17th by overcoming rigorous competition from 10 different student teams around the world. Many of the participating teams qualified for the Invitational only after being selected over competing teams in their own schools. All told, over 100 students participated in creating projects for the Invitational, producing over 25 different projects for non-profit organizations.

Competition judge Miguel Willis said: “I was very impressed with the winner of this year’s Iron Tech Lawyer Invitational – The University of Hong Kong team’s EC Casebank solution takes a novel and highly sophisticated approach to enhance the legal capability of injured workers’ to receive just compensation for their claims – within a simple and easy to use interface… showing much promise to empower workers to be active participants in the resolution of their claims. “

During the first semester LITE course, class students also created legal-related projects using video animation, document automation and chatbots. In the second semester LITE Lab course, students are working with real-world tech startups and social entrepreneurs from Cyberport, iDendron and the Fintech Association of Hong Kong on cutting-edge legal-related projects.  Mr Tang had previously been the organiser of LegalRegTechHack in conjunction with Global Legal Hackathon Hong Kong, where in its first year in 2018, the top team from Hong Kong won the top prize in New York, and LITE Lab@HKU currently invites lawyers and technologists from around the world to participate in its S.O.S e-Challenge to Save Our Small Businesses, Social Entrepreneurs and Startups as part of virtual FT Innovative Lawyers – Global Legal Hackathon Challenge due to COVID19.

As undergraduates, the four students were also the youngest Invitational participants, three of whom are law students and the fourth an arts and design student. The original idea arose when project leader Chloe Chan identified the lack of a user-friendly database when she worked at a personal injuries lawyer’s firm, and during the LITE course, the team worked with Neighbourhood and Worker’s Service Centre to better understand the needs of the relevant NGOs and injured workers, and then created a process and platform for collecting new data from that and other Hong Kong NGOs to add to the judicial decisions to feed to the open-source NLP engine from Allen Institute.

“The experience of bringing about EC Bank has boosted my sensitivity towards the closer connection between technological possibilities and legal realities, as well as getting acquainted with the adoption of LegalTech in streamlining legal processes,” said project leader Chloe Chan. Ms. Chan said that some of her learnings included “having [to] overcome obstacles such as the building a trustful and collaborative relationship with the participating NGOs, designing a UX/UI that best fits the product users and obtaining their feedback back and forth, as well as choosing and finetuning the key factors to be extracted from court judgements.”

Design student Jasmine Poon first because acquainted with LITE Lab@HKU and legaltech through participating in a LITE Lab@HKU mentored team for the Law Society of Hong Kong’s Belt & Road Justice Challenge.  “The [LITE] course’s projects have been a hackathon of sorts and a crash course for law students to touch upon the basics of entrepreneurship and technology.”

“It was very exciting to see student teams from around the world – including from Australia, Canada, Hong Kong and the United States —  present projects they had completed in a single semester,” said organiser Professor Tanina Rostain of Georgetown Law.  “All the projects were spectacular, in each case thoughtfully designed to address an important civil legal problem using very sophisticated digital tools.  It was especially inspiring in these terrible times to see students who are deeply committed to using technology to improve access to civil justice — and who will be carrying forward this commitment as they embark on their careers as lawyers and technologists. Congratulations to Hong Kong, UC Irvine, Melbourne, and all the other teams who participated.”

After the course and their competition submission, the students have been busy. They recruited new student team members with computer science backgrounds; competed and won the AI Future Tense Pitch Competition organised as part of Hong Kong Federation of Youth Groups’ HSBC Future Skills Training Programme; incorporated a company and named it Litex Limited (after the course); and have been accepted into Hong Kong Science and Technology Park’s Science and Technology Entrepreneurship Program.

LITE Lab@HKU’s Brian Tang was very proud of his students. “LITE Lab@HKU provides a sandbox and support for diverse students to connect, develop design-thinking and computational law mindsets and skillsets and create solutions through “hackathon as pedagogy”.  Full credit goes to this driven team who showed a lot of initiative and ingenuity to not only come up with and prototype a unique solution, but who also want to find a sustainable way to maintain the project and potentially expand into personal injuries. We look forward to supporting them in their impactful endeavours.”

You can reach Brian by email here.