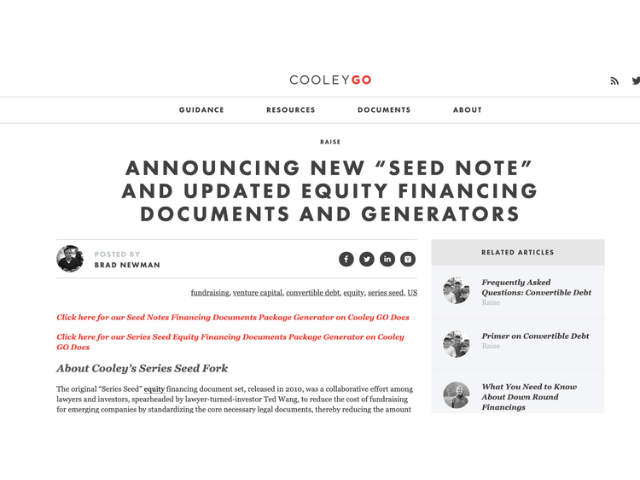 To a purist, you can’t open source the content of financial documents, just as Wikipedia is not an open source encyclopedia (despite what I wrote in another blog post). The reason for this is that a purist defines open source as referring only to software that is distributed for free accompanied by the underlying source code.

I am not a purist nor will I allow myself to be a victim of such hidebound restrictions (just kidding). I think the essence of the open source revolution is collaboration and sharing. People, often from different organizations, work together on a project, whether software or not, and then share the results of that work for free. An ideal open source projects goes one more step. You not only share the work product, you invite others to join with you in expanding the project or making it even better. That’s what open source means to me.

So, if you are a purist about these things, hold your nose and read on.

Silicon Valley stalwarts Fenwick and Cooley have an interesting open source project going relating to financing documents. The project seemed to start at Fenwick & West by former partner Ted Wang, who has moved into investing. His idea was to post a number of basic financing documents under a Creative Commons copyright, which essentially meant they were free for anyone to use. It is similar to an open source software license but covers text rather than code.

Over the years, these documents have been updated. Version 3.2, issued in 2014, is the latest version. You can see them here.

Advisory Board Member and Foundation Licensing Expert Adam Ruttenberg, pointed me to what they call the Cooley Fork, which you can read about there. For those new to open source software (many of us), a fork happens when you take open source code and dedicate it to a new purpose, or send it in a new direction. So fork is a good name for Cooley’s contribution.

Here is how Cooley described their fork:

Issuing convertible notes has become one of the most popular ways for startups to raise initial seed funding. Cooley uses these documents in hundreds of transactions each year for its startup clients and believes making these documents publicly available will add efficiency to the early-stage startup funding ecosystem and provide entrepreneurs and the community at large the opportunity to collaborate to ensure they evolve with the needs of entrepreneurs and investors.

In the open source spirit of the Series Seed project, we have made available to the wider community a Seed Note package, which includes a convertible promissory note, term sheet and supporting documentation, as an addition to our “fork” of the original Series Seed equity financing documents repository. The structure of the Cooley form of convertible notes was revamped several years ago to simplify the documentation process by removing the need for a separate Note Purchase Agreement, so there is no separate “purchase agreement” document. The Seed Note package is available as a new notes directory in our Series Seed fork on GitHub.

Cooley also updated some of the original Seed Series documents and included them in their GitHub repository. Again, for those of us new to open source software, most developers use the free open source code repository called Git or GitHub. It is somewhat ironically now owned by Microsoft, which continues to support it as open source.

Cooley went a step further and posted what the call a “Series Seed Convertible Note Financing Documents Generator.” This handy tool allows you to create customized financing documents right on the site. For free; no charge to use it.

Kudos to Ted Wang, Fenwick & West, and Cooley for their hard work for the legal community. Let us now about other document projects that are out there so we can feature them as well.