An Interview with Jonathan Pyle, creator of Docassemble 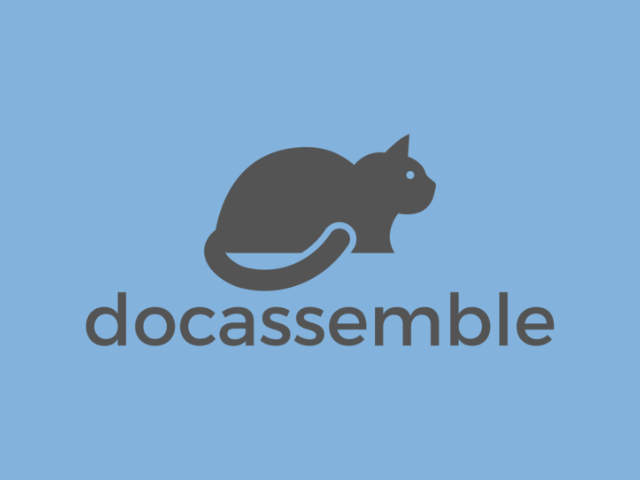 Jonathan Pyle is an attorney and contract performance officer at Philadelphia Legal Assistance, which has been providing free civil legal services to low-income residents of Philadelphia since 1996. In his spare time (nights and weekends) he also developed an open source document assembly system called Docassemble, which is a featured open source project at the Merlin Foundation.

In this interview, we wanted to ask Jonathan what inspired him to start this project and how it worked out for him. We also asked him what advice he had for others considering starting out an open source development project.

Q. How did you come up with the idea for a Document Assembly System?

A. In 2013, Jim Sandman, the President of the Legal Services Corporation, announced a goal of moving “the United States toward providing some form of effective assistance to 100% of persons otherwise unable to afford an attorney for dealing with essential civil legal needs.” For me, this was like John F. Kennedy’s challenge to put a man on the moon within a decade. I thought the goal of “100% access” was achievable, but I thought we would need technology to do a lot more than it was currently doing, and we would need more advanced legal tech than we currently had. The existing guided interview products were designed to be “so easy to use, a lawyer can do it!” Bicycles with training wheels are useful, but the problem is that they are not so good for competing in the Tour de France. To achieve 100% access, legal technologists needed professional tools, whether they have a steep learning curve or not.

Q. What made you decide to open source it?

A. Ever since I was a teenager, Richard M. Stallman (the founder of the Free Software Foundation) has been a hero of mine. I firmly believe in the principles of the free software movement, so I couldn’t write code and not release it as free and open-source.

I chose the MIT License because I was happy to invite for-profits to take the code and make proprietary modifications. Open-source software with licenses like the MIT License help for-profits produce better software faster. I work in the field of legal aid, so I want the non-profit sector to have good software, but I used to be an associate at a big firm and I know what it is like to use sub-par software while billing hundreds of dollars per hour. I want law firms to have good software, too. The legal sector can benefit from having a robust baseline of open-source commodity software, just as open-source web server and database software has spurred innovation in other industries.

Q. What steps does one have to take to put a project into open source? I am asking for people who know how to develop code but not how to share it as open source.

A. If you want to open-source your software, you should read the popular open-source licenses (e.g., GPL, BSD, Apache, MIT) and decide which one fits with your intentions. Then copy the language into a file called LICENSE.txt, put your name and the current year on the copyright line, and upload your code to GitHub. That’s all there is to it.

Q. What has been the response? Who has downloaded it and put it to use?

A. Docassemble is being used by solo practitioners, non-profit legal service providers, courts, big law firms, companies that provide services to law firms, government agencies, and Fortune 500 corporations. The majority of the use is in the United States but it is being used in at least 17 other countries. It is being taught in law schools in Canada, U.S., Brazil, and Australia.

Q. Do you have other open source projects in mind?

A. I would like to build a question-and-answer site like Stack Overflow for legal problems. If I have an obscure technology problem, I can find a solution to my problem by Googling it because someone else in my situation has described their problem on Stack Overflow. Why shouldn’t the same be true for messy, real life legal problems? Personally identifiable information would need to be removed from questions and the answers would need to be curated by lawyers, but I think it would be very helpful to have a site with a lot of data about problems, recommended solutions, and actual outcomes, for every jurisdiction. Most lawyers would probably think this is a terrible idea, but I trust ordinary people to process information they find on the internet.

Q. What advice would you give to others about open Sourcing a software project?

A. The first lesson to learn is “if you build it, they will not come.” Releasing code as open-source does not mean that future development work is going to automatically be “crowdsourced.” Developers are pretty rare in the legal sector, and most of them are too busy to spend significant time improving other people’s code. The benefit of releasing code as open-source is that a lot of people will test it out and send you bug reports and feature suggestions, and as a result your code will improve.

I would also advise writing open-source code in such a way that it can be easily customized and extended. For many users, the “selling point” of open-source software is the ability to customize without restrictions. Ideally, users should be able to customize without altering the code base, so that they can continue to receive your upgrades without needing to recreate their customizations.

You can read more about Docassemble here.